London stretches out below the window of the Stonewall meeting room on the 13th floor of a Waterloo tower block, and a group of 10 Russian human rights defenders admire the view. “London is the capital of Great Britain,” says Sergei Alekseenko, the director of the Maximum LGBT organisation, dusting off his high school English with a smile. He adds, in Russian: “It’s good to be here.”

Russia’s LGBT organizations are about to be muzzled. A series of bills, designed to restrict freedom of expression of individuals and groups, are beginning to pose a serious threat to those working to protect human rights in the country.

The most recent cause for concern is proposed legislation related to restrictions of internet usage, which is making its way through parliament. Positioned as anti-terror legislation, the proposed bills would oblige website operators to disclose all user activities to the government and would set new restrictions for individuals and organizations accepting donations through online payment processors. As the 2014 Winter Olympics is to be held in the Russian city Sochi, former IOC president Jacques Rogge, whose term ended in September, in August expressed that "the Olympic Charter is very clear. It says that sport is a human right and it should be available to all regardless of race, sex or sexual orientation."

President Obama told Russian gay rights leaders and other activists Friday that fighting for social justice helped him to get elected president. “I got my start as a community organizer,” Mr. Obama said during a meeting with activists in St. Petersburg, Russia. “I got elected president by engaging people at a grassroots level.”

Russia has experienced an upsurge in homophobic vigilantism following the introduction of legislation outlawing "homosexual propaganda" in June, gay and lesbian groups say. The new laws, which have cast a shadow over the Winter Olympics to be held in Sochi early next year, ban the promotion of "non-traditional sexual relations" among minors.

Russia’s first organized movement to protect LGBT rights emerged in the late 1980s and featured such activists as Evgeniya Debryanskaya, Roman Kalinin (The Association of Sexual Minorities, the Libertarian Party), professor Alexander Kukharsky, Olga Krauze (‘Wings’ Gay and Lesbian Association). However, the movement didn’t last long. New LGBT wave rose in the 2000s. In 2004, LaSky AIDS/HIV prevention network was launched. Now it operates in all Russian regions. In 2005, GayRussia.Ru project headed by activist Nikolay Alekseev was set up in Moscow and then Russia’s LGBT Network followed in 2006. The latter is Russia’s only interregional LGBT rights protection movement. In 2008, the International Side by Side LGBT film festival was launched and a number of regional organizations were set up, such as the Moscow-based Rainbow LGBT Network, Coming Out and Equal Rights in St.Petersburg as well as Rainbow Syndrome and Rainbow House in the cities of Rostov on Don and Tyumen.

The newest US senator on Capitol Hill took aim at the Russian government this week, condemning what he called the country’s “hateful” new law on homosexuality, and asking Russia’s Ambassador to the United States Sergey Kislyak for assurances that American athletes and tourists at the Sochi 2014 Winter Olympic Games will be safe. 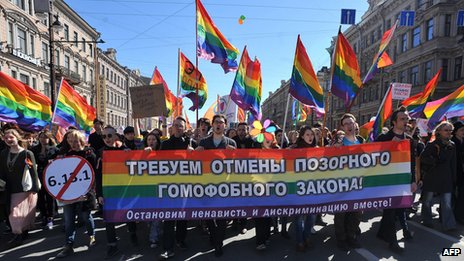 Four Dutch nationals have been questioned by police in northern Russia over alleged "gay propaganda". The group were making a film about gay rights during a forum in Murmansk, but were later detained by police on Sunday and questioned for several hours. One of them, Kris van der Veen, a left-wing councillor from Groningen, said they were not facing a court case.